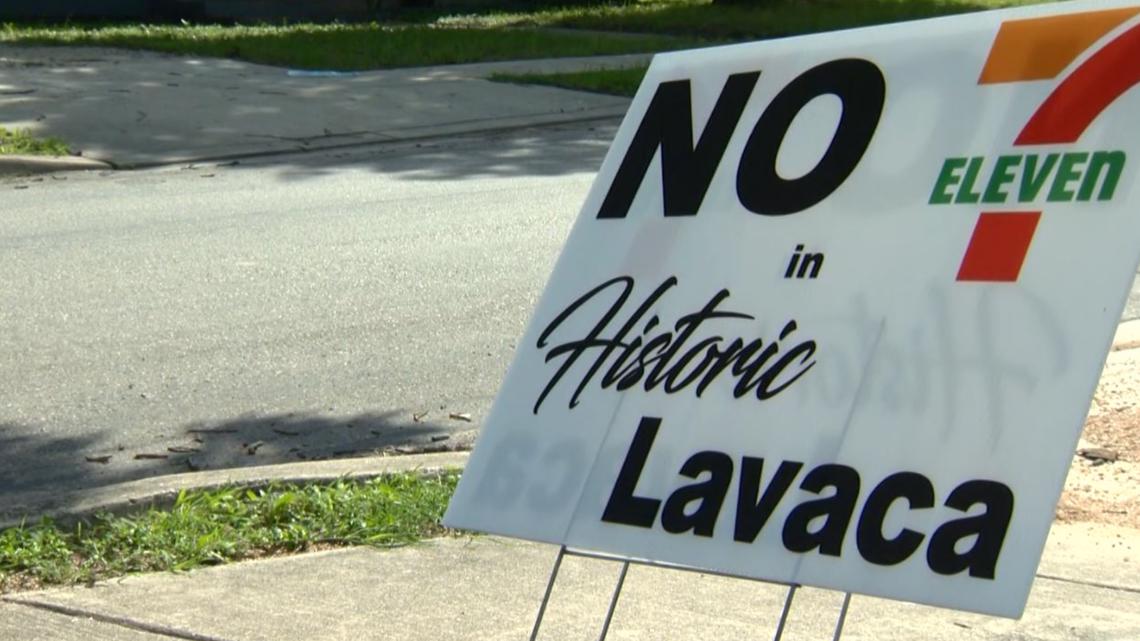 An empty lot is at the center of a neighborhood controversy. Residents are fighting against the plan to build a 7-Eleven and a gas station.

SAN ANTONIO – An empty lot is at the center of a neighborhood controversy in downtown San Antonio. Residents are fighting against plans to build a 7-Eleven store and gas station.

Many residents who live on the streets of Florida and Carolina carry signs that read: “No 7-Eleven in Historic Lavaca”. Hilda Juarez, who has had her sign for three weeks, says her house is located directly across from the empty lot. She said the way her property is positioned it would face the back of the 7-Eleven store and likely have a view of the dumpsters.

But there’s more than an ugly sight for a homeowner at stake. Juarez says the proposed construction would also break the historic charm of what the Lavaca Neighborhood Association (LNA) says is San Antonio’s oldest neighborhood.

“Lavaca is historic. We are next to King William, so houses that were built before the 1900s. My house, in particular, was built in 1920, ”Juarez said. “I think they’re probably a little greedy, seeing as there’s traffic coming from (Interstate) 37. There’s the Alamodome, Southtown has turned into something beautiful and they just want one.” piece. But he has no place in Lavaca.

LNA said 75 residents have signed a petition or contacted them to share their concerns, the main ones being pedestrian safety and increased traffic. Juarez said the soccer team and track team from a nearby school were running in the neighborhood.

“This is going to be a big concern. The last thing I want to see is something happens to these kids because one of these trucks is coming, ”Juarez said.

The empty lot is zoned for commercial purposes and does not need public participation or city council action to move forward. Unless the owner backs off, there isn’t much there is to stop them.

In a statement to KENS 5, ANL President Cherise Rohr-Allegrini said the neighbors support the development, but not the convenience store and gas station.

“We hope that 7-Eleven chooses not to build there and that we can work with the owners to find another business. Neighbors support a store, provided its hours are not 24/7. Neighbors would also support multi-family residences, as the SA Tomorrow Plan recommends, ”Rohr-Allegrini continued.

District 1 councilor Roberto Treviño, who represents the area, said he had met with the LNA, community members and the Historical and Design Review Board to discuss these concerns.

“I’m in conversation with the owner, to make sure these community concerns are heard and taken into account before moving forward,” Treviño said.

According to the city’s codes and ordinances department, the owner has not officially submitted the documents necessary to move forward with construction. KENS 5 has contacted the owner but we have not yet received a response.