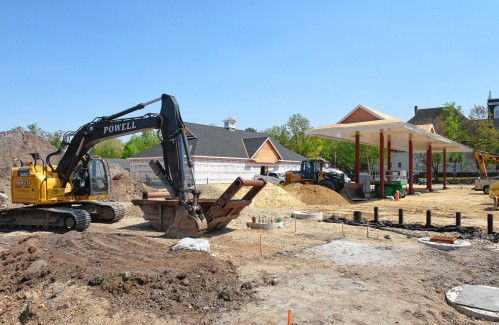 The Recorder – Construction of a service station in progress at Orange

ORANGE – Construction of a new gas station in front of the post office is expected to be completed by October.

“What we get is a typical gas station, with additional market space and a retail food vendor,” says Alec Wade, director of planning and community development at Orange.

The site at the intersection of East River and South Main streets is under construction by South Coast Development LLC, although Wade said he did not know who would be the tenants of the site. Wade said the plans generated mixed reactions from community members.

“Some were excited and excited to see him come in; others had concerns, ”he says.

Construction work resulted in the locally popular wooden eagle sculpture being moved to the side of the site. The Planning Council has discussed potential next sculpture homes and it is believed that Riverfront Park or outside the old Butterfield School would be suitable locations. Wade said he believed the Orange Fire Department housed the sculpture to keep it safe in the interim.

The land was already the subject of controversial Planning Council meetings five years ago, when convenience store chain Honey Farms got approval to build an eight-pump gas station at 24 East River Street. Public hearing took place over four meetings and residents spoke out for and against the project, which ultimately obtained a special permit.

Honey Farms offered a gas station with a hanging awning, a 4,500-square-foot convenience store with drive-thru, and a 26-by-50-foot single bay car wash. Honey Farms also has a location at 167 Daniel Shays Highway.

Patrick McLaughlin, a civil engineer with MHF Design Consultants in New Hampshire, said in a public hearing that the proposed project was amended in response to concerns expressed in public, ministerial and initial peer reviews. McLaughlin and Senior Project Manager Heather Monticup of Greenman-Pedersen Inc. in Wilmington said they reviewed the layout of the project’s driveway and pedestrian access, as well as the location and architecture of the car wash.

But Richard Sheridan, who was a member of the Planning Council at the time, said this week that those plans were scrapped when landowner Wilfred Iandoli, president and CEO of Honey Farms, died on September 17, 2016, at the age of 89. sold the Honey Farms company in 2017.