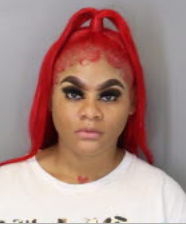 MEMPHIS, Tennessee – A woman is behind bars after a man was seriously injured in a shooting at a local convenience store while several children were in attendance.

Memphis Police responded on July 16 to an aggravated assault at a convenience store in Mendenhall’s 2700 block.

Police found a man lying on the ground with gunshot wounds, according to an affidavit.

He told the police that someone took his gun and shot him.

He was rushed to Regional One with severe damage to internal organs, records show.

Video of the shooting showed the suspect arriving at the store a minute after the victim.

Three young children also exited the suspect’s vehicle, according to the affidavit.

As the victim stood by the register, one of the men reached out and attempted to take his gun.

When the victim turned and grabbed his arm, two other men pointed guns at him, according to records.

A red-haired woman stepped forward and attempted to help the suspects subdue the victim, according to the affidavit.

The victim was then shot several times and the suspects ran towards the SUV.

The children were still in the store as the victim lay on the floor crying for help, according to records.

A suspect identified as Tenister Evans ran for the door, stood over the victim and yelled at the children to get back to the SUV.

According to the affidavit, she slapped one of the children in the face before getting into the back of the SUV.

Evans then drove the vehicle out of the store, according to records.

She was identified in a series of photos and charged with particularly aggravated theft, aiding and abetting after the fact and child abuse.

Download the FOX13 Memphis app to receive alerts for the latest news in your neighborhood.